Sinterklaas has arrived in the Netherlands! Who?

If you ever visited the Netherlands around the beginning of December, you might have noticed that store decorations, tv-commercials and advertisements are not necessarily Christmas-spirited yet. Not Santa Claus, but another white-bearded, old man in red clothes, accompanied by his colorfully dressed helping hands, the Pieten, is what it is all about this time of year. When learning about Dutch traditions, Sinterklaas can not be forgotten!

Every year in November, Sinterklaas, his white horse Amerigo and the Pieten arrive on the Dutch mainland in a big steamship coming from Spain, full of children’s presents. Thousands of excited children are awaiting them, jumping, singing and waving (and a little nervous, hoping they haven’t been too naughty this year). For them, Sinterklaas is the event of the year.

But wait..what about Sinterklaas and this years’ circumstances due to Covid-19? Many children were worried about whether or not Sinterklaas was able to arrive safely this year. Luckily he is a creative and intelligent man who came up with a clever solution: the steamship arrived at the secret hidden town of Zwalk this weekend and the children could follow the event by livestream, to make sure that everyone would stay safely at home!

A feast for the sweet tooth

Traditionally, Sinterklaas celebrates his birthday on December 5th at Pakjesavond (gift night), when he brings all the children bags full of presents, treats and sweets.

The weeks prior to this evening supermarkets and pastry shops are packed with typical Sinterklaas delicacies. The most famous among them are kruidnoten (spice nuts), often referred to as pepernoten (however originally they are two different things). Kruidnoten are small, crunchy, cookie-like confectioneries spiced with cinnamon, nutmeg and ginger.

Is your mouth watering already? In many places you can now find pop-up stores completely dedicated to kruidnoten with all kinds of flavors such as caramel sea salt or pumpkin spice, but also flavours as adventurous as limoncello, licorice, or gin tonic..

The treat is so popular that, at most Dutch supermarkets, kruidnoten can be found as early as in August! So don’t be surprised when you see a Dutch person eating kruidnoten in the middle of a heat-wave..

A children’s friend for centuries..or not?

Where does this mysterious children’s friend come from, you may be wondering. Sinterklaas is derived from Saint Nicolas, a historical figure who lived in the 3rd century A.D. and was named as the patron saint of children. The figure of Sinterklaas has known many different forms and shapes over the centuries and he has not always been the friendly old grandpa he resembles today. The ‘children’s friend’ image stems from the late 1800s, but before that, Sinterklaas was actually depicted as a scary and violent bogeyman that was used for frightening (naughty) children and making them obedient. Not quite the gezelligheid Sinterkaas is associated with nowadays..

So, hopefully you feel like you got to know the Dutch a little bit better now and understand what the crazy Dutch people are so obsessed with this time of year other than Christmas. Would you like to learn more about Dutch culture, history and habits? We offer various courses that make you not only familiar with the Dutch language, but also with the dynamic culture and background of the Netherlands!

[1] One of the most famous Dutch Sinterklaas songs, translated as ‘Look, the steamship is arriving.’ 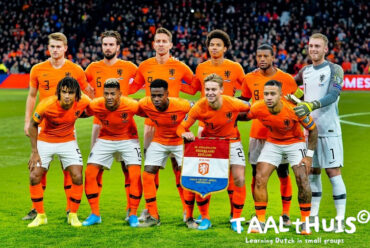